Phew. Finally got there myself. Definitely one of the easier From games to platinum though the endgame challenge is pretty up there with the sheer number of damage sponge AoE attack bosses. 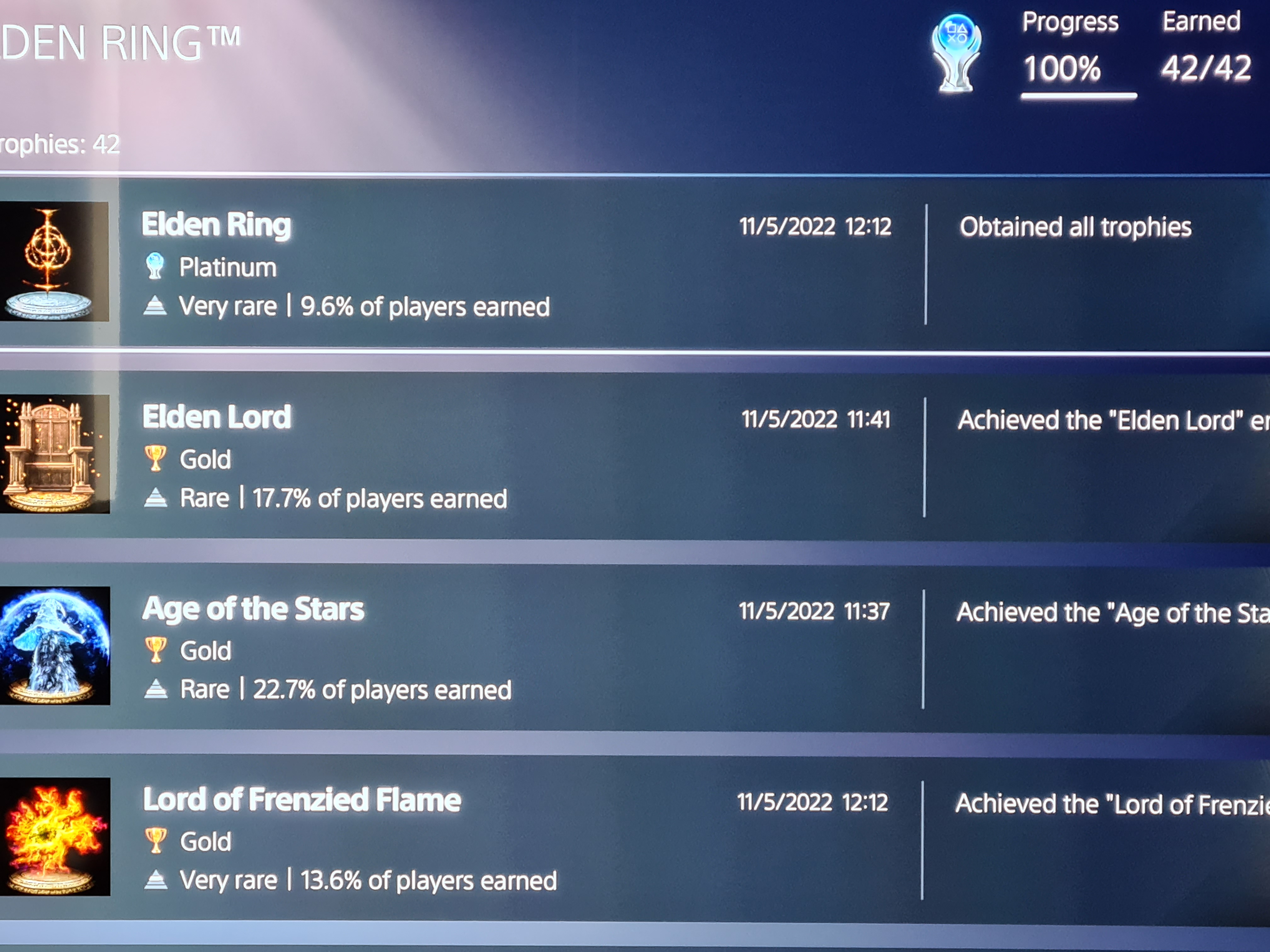 Elden Beast was a struggle and I had to respec out of my bleed dex build into more faith and incantation damage but he wasn't too tough after that. Not a great final boss though because of how much he runs away and just spams endless spells at you.

Malenia, Maliketh and Placidusax take the crown for the top boss battles for me. Placidusax felt like he should have been the final boss, a seriously epic encounter.
Top

Malenia is a great fight and I felt like I was putting everything I'd learned throughout the game into practice. Maliketh was just total chaos and panic, though - it only took about 3 attempts but I've no idea how I scraped through the second phase. Felt more like luck than anything.

I'm undecided on whether I prefer the open world of Elden Ring or the tightly-designed areas of previous From games. I'm a good way through Dark Souls now and the way the world connects together is incredible and feels much more intricate than Elden Ring, but the freedom of the Lands Between is liberating and the dramatic landscapes you see are totally worth the format change. I think it was the right choice for Elden Ring; I'm not sure if I want the next game to go that direction, though.
Top

I'm hoping they keep the open world aspect limited to Elden Ring and stick with smaller worlds for their other franchises. Elden Ring is incredible in its sheer scope, there were many occasions I stopped for a few minutes just to soak in the views and atmosphere. But overall I think Dark Souls, DkS3, Bloodborne and DeS are better games. That said, they're not exactly easy to top. Elden Ring is still the best open world game I've ever played by a decent margin.

The repetitive asset reuse towards the end just dragged it down a bit too much to beat its predecessors for me. Particularly in areas that seemed to only throw combinations of the most obnoxious units in the game at you all at once, and some of the later mini dungeons had a few too many "gotcha" moments in where it was clearly designed to be extra cruel. There's only so many giant hands, crucible knights, tree spirits and lacerated rot worms that I can fight before it gets super stale. The Haligtree and Crumbling Azula were very nicely designed areas though.
Top
Post Reply
123 posts