I do so love it when we spend a whole GP talking about tyre wear.
Top

I don't tend to mind it so much when the tyre discussion is based on fairly extreme circumstances as Mercedes had today. But yeah, I'm bored with these "designed to degrade" tyres too. I understand the logic behind having them; they're the most limiting factor to car performance, and they're probably a major part of why the teams are all so close... but they attract too much attention.
Top

The Sky commentary actually pissed me off a bit today - they were constantly trying to push the narrative that this was all an amazing thing that was happening before our eyes. Over the last few years the sport has generally moved on from silly tyres, it doesn't want to go back there again.

So many drivers today were just pootling around for large swathes of the race. Not my cup of tea at all.
Top

The forced tyre degradation is just an arbitrary obstacle masked as a way of mixing up strategies. They may as well say that at some point during the race, each driver has to pull over, get out and run around the car three times.

I miss the days of mid-race refuelling, because at least that did allow for drastically different strategies that would allow midfielders to attempt a risky one stop on full fuel while the front-runners usually opted for low fuel and more stops.
Top

I don't miss the refueling days. It wouldn't be so bad if you knew what fuel loads each car had, but that information wasn't public so it was just a guessing game. Yes, it made for varied strategies, but the only way you knew about them was after they'd played out. One car could overtake another, but you frequently had to just dismiss that because they weren't on the same fuel strategy. You get it with tyres too, but at least you can tell which tyres a car is on and predict the rest of that strategy.
Top

Sky mentioned a message from Ross Brawn during the race asking them to thank the FIA for using the softer tyres as they had given the race some excitement which is laughable. To me it is in the same realm as Bernie's sprinkler idea.

This morning the general talk appears to be that it was a good race and Red Bull were brilliant in their strategic work which appears to completely ignore the fact that all they did was pass a Mercedes car which was eating its tyres.
Top

Mercedes are so dominant that any time they don't win it's seen as a major victory, and Max is always a popular winner. It took me by surprise that he only had 9 wins to his name, I think he's held in such high esteem that it feels like he ought to have more.
Top

Yeah, it would just be nice if they didn't go overboard as it masks the ingrained issues that the sport has around competitiveness.
Top

I know it's pretty par for the course at Catalunya, but that was a dreary race. We've had a number of occasions this year when a midfield train has had a chaotic last lap with overtakes all over the shop, but there wasn't a single pass in the 6-car train that consisted of Vettel, Albon, Gasly, Norris, Ricciardo and Kvyat who with the exception of Vettel, all finished fractions of a second apart. It's an absolutely rubbish race track for F1, and I think ranks maybe only slightly above Monaco or Sochi.

The most memorable part of the race was Vettel getting shirty with his engineer. Man, he really can't be out of there soon enough, for mutual benefit.
Top

I like how Hamilton claims he didn't even realise it was the final lap because he was in The Zone, when in all likelihood he was so bored that he just spaced out. I think the only thing that could have livened things up a bit was rain, and even then I doubt there would have been many more opportunities.

Catalunya is far, far worse than Monaco. Even ignoring the racing aspect, Monaco is a spectacle and a driving challenge which elevates it above the blandness of Spain, but it also can and does produce some great races despite its reputation. If memory serves, at least two of the last five races at Monaco were season highlights.

Sochi on the other hand is only entertaining for watching the drivers squirm around Putin in the ready room.

For my money, Abu Dhabi or possibly Singapore are the worst circuits in recent years. Both are overly-long and completely flat with boring hard-braking corners.
Top

The media really are trying to do all they can to keep this title race alive.

It's 37 points already, it's going to take some major reliability issues or mistakes (something Hamilton just doesn't do) to get Verstappan or Botas back in the fight.
Top

It's going to be interesting how Catalunya fares in 2022 with all the new regs. The jury's still out on whether this new close racing will materialise or not, but it could potentially open up all the race tracks a bit more.

Bottas really shows up his lower pace in the same car in race conditions. If he doesn't get ahead at the first corner, he typically has no answer to Hamilton.
Top

Just once I'd like to hear Mercedes address their absolute dominance, but they won't, because they like to remain humble. Unfortunately it's humble to the point of annoyance. I remember the German grand Prix (was it last year? The Mercedes anniversary one) where they'd all gotten dressed up in period overalls, and it looked like they were having a good time, and they then had a shocker of a race. Wolff later went on to say that they had dropped the ball because of the frivolity and it would never happen again.

I laughed when on the channel 4 coverage of yesterday's race, a question was put to Christian Horner about Wolff's talking up Red Bull's chances, and Horner's reply was "Well Toto is full of fertilizer".
Top

So this is supposedly going to be the final calendar for 2020: 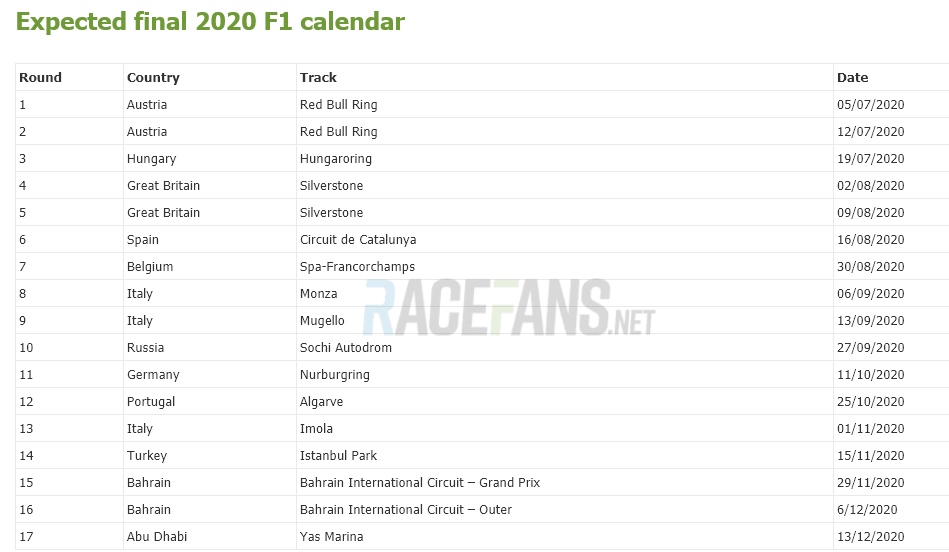 Sadly we're still ending in Abu Dhabi, but there are some interesting races preceding it. The two Bahrain races may be held on different layouts (though not the dreadful "long" variant that was only ever raced once and made for a hideously dull event), we're returning to the excellent Istanbul Park that we haven't visited in nearly a decade, and we have races at both Mugello and the Algarve circuit which have never hosted F1 events before.
Top
Post Reply
368 posts